Charlotte Ashlock is a crazy idealist trying to make the world a better place! 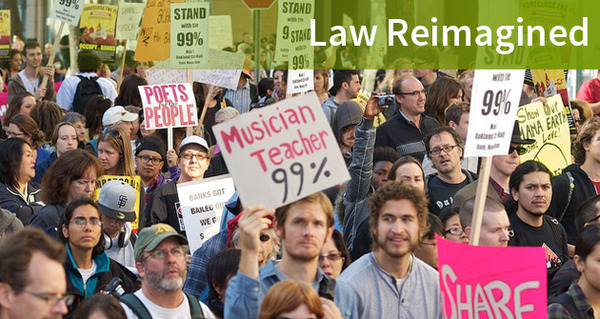 A scientist & a law professor (Fritjof Capra & Ugo Mattei) are teaming up to write The Ecology of Law, which denounces the law for being too much like a machine. The law really should be like a living system that exists to serve humans & the natural world. Their erudite and exhaustively researched manuscript is surprisingly radical. Ugo Mattei even said lawbreakers had the potential to be, “the heroes of our times.”

Of course, the concept of civil disobedience- protesting an unjust law by breaking it- is familiar to most. But their book goes a step beyond civil disobedience, questioning whether an unjust or unwise law really deserves to be called law at all. Rather than just seeking legal reform, the authors call into question the assumptions at the foundation of our modern law.

What deserves the name of “law?”

As I listened to the authors, I began to wonder, “Will people get angry with them, and accuse them of promoting anarchy?!” The law the authors dreamed of was just so different from the law most of us know. Fritjof Capra, the scientist author, is well-known for his paradigm-shifting work in science (he wrote the bestselling book, The Tao of Physics). The systems thinking promoted by Fritjof is now widely accepted in science. But when you take systems thinking into the legal sphere— it upturns our very conceptions of hierarchy & power!

Fritjof & Ugo support “generative law”- law that generates health, prosperity, & well being for people and the planet. They oppose “extractive law,” basically any law that threatens our future or shrinks our common pie. (Special interests are known for shrinking the overall pie, just so they can get a larger slice.) A law that gave oil companies permission to destroy the rainforest while extracting oil, would be an example of extractive law.

This distinction between “generative” and “extractive” law utterly bucks more traditional notions of law. Most of are used to thinking of law as whatever is “in the books.” But why should we unreflectively accept what is in the books, without thinking deeply about whether it is helping or hurting us? Most people justify obedience to the law because they think disorder would be even worse. But is the world we have now- a world of ecological crisis and racial injustice- is that even orderly & well-regulated to begin with?

Do gangs have law?

When I worked as a teen mentor in a low-income neighborhood, I watched a documentary on youth in the prison system. My heart hurt when I saw kids like the ones I taught, wearing the orange uniforms and struggling in that hostile environment. But the documentary also showed shots of this fierce old rich guy talking loudly about how he was defending his neighborhood from gang violence by campaigning for tough-on-crime laws.

So it blew my mind when Ugo Mattei told us, “Gangs have laws.” Of course I’d always known that gangs had strict rules that their members had to live by. But in The Ecology of Law, “the law of the state is not the only law.” This gives the codes of the gang and the laws of the land a kind of strange equality.

“The law is simply a way of living together,” our authors explained. In this mode of thinking, a well-functioning society does not have one “law of the land.” Instead it benefits from “pluralistic law,” or many different systems of law meshing together and interacting to serve human needs. It’s hard for me to imagine the tattooed gang leader and the fierce neighborhood watch leader finding a way to respect one another that way…. but stranger things have happened.

“Law should mimic nature, not the market,” the authors said, reinforcing the idea that law needs to be an eco-system, not a well-oiled clock. A good system of law is one that preserves and respects human agency, instead of treating humans like pieces to be manipulated.

What if, instead of looking at the block, we looked at the network? We should value not just individuals, but the connections & relationships between them!

Is our current system of law like “The Matrix?”

“The idea that law belongs to state- we criticize that,” our authors said. “The law is inside of us, part of us, like language or beliefs.”

When the authors said this, I had a flashback to a scene from the Matrix series. In this scene, Neo realizes that the Matrix only has power over him because he’s been playing by its rules! He makes a decision to quit obeying the rules of the robots’ reality. Having made this mental leap, he is able to reach out his hand, slow down a cluster of bullets, and casually pluck a floating bullet out of midair.

Sometimes a law can feel as mechanical and inevitable as a bullet speeding towards you. But the law only works that way- that mechanistic way- if we as the people are willing to accept that model. In reality, the law is controlled by the way we think about it, not some cold hard logic of metal and propulsion.

Perhaps The Ecology of Law, will help all of us achieve a “Neo” moment. We will have a profound philosophical realization: “Law is not in the books. It is within us.” If we see a metaphorical “bullet” heading where it should not go, we will not wait for it to hit. We will say, “Why does it have to be this way?”