Ken is the coauthor (along with Jane Ripley and Eunice Parisi-Carew) of Collaboration Begins With You. He is also chief spiritual officer (CSO) of The Ken Blanchard Companies, an international management training and consulting firm that he and his wife, Dr. Marjorie Blanchard, founded in 1979 in San Diego, California. 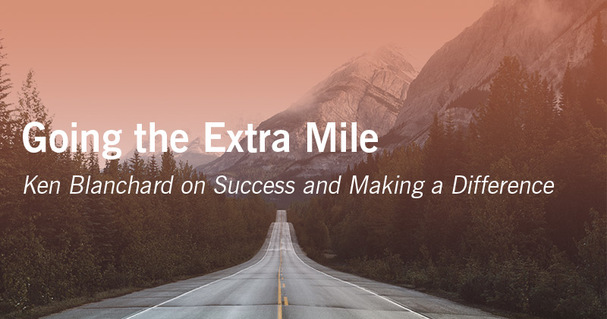 Making a positive difference in the world, big or small, comes down to sacrifice. I refer to this as the “extra mile” concept. It used to be a Roman law that a soldier could ask a citizen to carry his pack for a mile. Being a law, the citizen had to do it. As the story goes, one day a soldier saw a citizen and said, “Would you please carry my pack?” The citizen not only carried the soldier’s pack one mile, but carried it an extra mile as well. The impressed soldier asked, “Why did you go that extra mile?” The citizen replied, “The first mile was for the state, and the second mile was for you.”

My father applied the “extra mile” concept in his life. He graduated from the Naval Academy in 1924. The leaders of the country thought we had just fought the war to end all wars-World War I-and they did not think we needed many officers.

So my father was released from the Navy after his senior cruise. He entered Harvard Business School in January 1925, and after graduation he began a career on Wall Street, ending up with the National City Bank. His career was going well, and he was being groomed for a vice presidency. Then in 1940, when I was one year old, he came home and said to my mom, “Well, I quit today.”

Dad said, “I told you when we got married that if the country ever got in trouble, I owed it something. Hitler is crazy and it’s only a matter of time until the Japanese get in the war, so I rejoined the Navy. I want to contribute. I want to make a difference here.” So Dad went from a high-paying job on Wall Street to one as a lieutenant at the Brooklyn Navy Yard.

When Pearl Harbor came, it looked as if he was going to spend the war at the Navy yard because he lacked experience. But my father wouldn’t settle for that. He called an old classmate who worked at the Bureau of Personnel in Washington and said, “What have you got for an old fart with no experience?”

His friend called back a few days later and said, “Ted, all I have for someone with your experience is a suicide group going to the Marshall Islands.” My father said, “You’ve got your man.” He took command of 12 LCIs-Landing Craft Infantry-whose job it was to protect the Marines and the frogmen landing on the beaches. The fighting in the Marshall Islands proved in many ways to be Asia’s version of Normandy. Seventy-five percent of my Dad’s men were killed or wounded.

You can win the book that inspired this article—for FREE!

For BK's 25th anniversary, we are giving away 5 of our iconic books every month. Feeling lucky? Then...

Lighten Your Load for the Good Life

Leadership for the Average Joe
Image Credit: Scott Maentz By: Kathryn Schuyler In honor of my newfound internship at Berrett-Koehler Publishers, I thought I’d take a look at one of their bestsellers: the Arbinger...
Read more...

The Magic of Stay Interviews—and How to Use Them
An Interview with Sharon Jordan-Evans and Beverly Kaye Why did you write this book? We wrote the first edition of Love ‘Em or Lose ‘Em for busy managers who were struggling to retain their good...
Read more...

Life is Easier and Brighter For Peacocks Now
A vibrant Q&amp;A with BJ Gallagher, author of A Peacock in the Land of Penguins (bonus: there are lots of colorful pictures!)  Paper collage/painting by Florida artist Elizabeth St....
Read more...

The Most Surprising Political Event of 20 Years
In honor of the 20th Anniversary Edition of When Corporations Rule the World , we discussed with David Korten the opportunities and perils of this moment in history, with regards to corporate...
Read more...