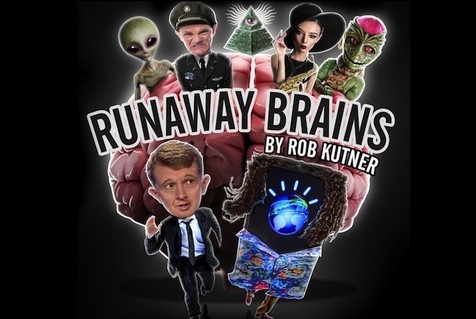 Hey, here’s another thing that I never blogged about because it launched during the great summer blog drought. My friend Rob Kutner, who wrote for The Daily Show and is now at Conan, had an idea for a comedy podcast in which my silicon arch-nemesis Watson and I were forced to go on the lam after our Jeopardy! encounter, and had adventures! Watson’s giant brain, you see, is full of secrets that could bring down any number of powerful institutions. And I’m carrying him in our backpack! We’re both in big trouble from the U.S. government, hackers, Freemasons, aliens, the Build-a-Bear Workshop, and all the other shadowy forces that control the world.

My creative consultancy was pretty much limited to suggesting the title: Runaway Brains! Like “runaway trains,” get it? It’s a pun.

The whole thing turned out great, and it’s a fun, quick listen. Here’s a Splitsider review backing me up on this. The first few episodes are, I believe, free from Howl. If you like ’em enough to want to hear the final fate of me and Watson, there’s a cheap one-month subscription available.

Enjoy! And watch out for the Lizard-men!

Step Up, Step Out, Be Bold - Daring to Do Our Best Work Together

Progressive Ideas for a New Era

Holiday Blues
I’m sipping chaomomile tea as I write this. I wonder whether the taste of chamomile tea is inherently comforting, or whether it just tastes comforting because my mom used to make it for me special...
Read more...

Payphone Blues
I have a friend who never made the transition to a cel phone. He preferred using a pay telephone at the diner where he ate breakfast every day. One day, the payphone went out of commission....
Read more...

Techies are Turning White Collars Dark Blue
New Orleans    The first shots are being fired in a workplace battleground where workers have been living the myth that their status was protected and their bosses were their protectors. Modern...
Read more...

Blue Ocean Strategy
A shopkeeper was dismayed when a brand new business much like his own opened up next door and erected a huge sign which read "BEST DEALS."He was horrified when another competitor opened up on his...
Read more...

Big Progress in Bristol
Bristol     Oh, the difference a year makes in an organization’s progress! I could feel it almost immediately as we walked to the new office on the border of St. Paul’s, a neighborhood we are...
Read more...

Payday Lending is a Huge Money Maker for Big Banks
New Orleans The Consumer Financial Protection Bureau (CFPB) released a recent report in the United States with the boring title “Online Payday Loan Payments,” but despite that, wake-up, this is...
Read more...

Be Open to Big Vision Photobombs
While visiting New Mexico this summer, I raised my phone to take a photo of some pink flowers against a blue sky when this happened: This hummingbird flew right into my frame and posed for a...
Read more...

Big Data
Nothing boosts the prospects of page hits on a blog – or funding of a grant proposal – like the phrase “big data.” Why are we enamored with “big data”? read more
Read more...

The Big Idea Behind Integrative Medicine
My new Huffington Post piece explores the emerging field of integrative medicine.  I have been involved in the medical field as far back as 1972 when I did an internship at the Berkeley Free...
Read more...