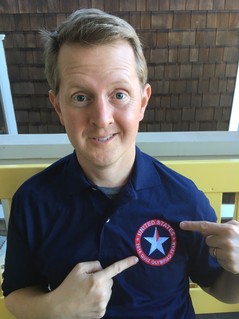 Way back in 2014, when gay marriage was illegal in half the country, True Detective and the iPhone 6 were brand new, and Donald Trump was still just a reality TV punchline, my friend Paul Bailey asked if I might want to represent my country in the first “Quiz Olympiad,” an international quizzing championship scheduled for the end of 2016.

Sure! I said. I’ve always wanted to be an Olympian, and my best pole vaulting years are probably behind me.

Fast-forward to 2016 and IT’S ALL HAPPENING! Teams from four continents are headed to Athens, Greece in less than a month to compete in the International Quizzing Association’s very first “Quiz Olympiad.” Joining me on Team USA are some of the best American quizzers I know, including some you might recognize from their big wins on Jeopardy! (Shane Whitlock) or Who Wants to Be a Millionaire (Ed Toutant).

I’ve only been to one of these European quiz tournaments before, and it was a daunting challenge. But Team USA is ready to answer the call. My shirt even showed up in the mail today!

Paul Bailey notes that you can support America’s nerdiest Olympians by buying yourself a team shirt, one just like mine except it doesn’t smell like the Costco hummus I spilled on mine earlier. More details here; orders for the next run of shirts are due this week.

In November, the Quiz Olympiad website will have updates on how we’re doing against the Brits and Belgians and the other titans of international quizzing, the ‘roided-up East German swimmers of this particular Olympics. A nation’s eyes will be upon us. We won’t let you down.

A Walk Across America
The edited yet comprehensive video of one man's walk across America -- from San Francisco to New York.
Read more...

If I Wanted America to Fail
A stunning (and, let's admit it, pretty convincing if you didn't know the facts) viral video by Free Market America that was timed to be released during Earth Day 2012 attacks sustainability...
Read more...

Year in Review: Latin America in 2014
By John Perkins I just returned from a magical trip with a special group of people to amazing Peru. Our group experienced sacred sites and ceremonies with the Q’ero and other Quechua elders and...
Read more...

The Rise of Authoritarianism in America
Baton Rouge   You know when we’re in hard times, when a random neighbor stops in front of your house on a Sunday morning and over the din of your faithful Australian shepherd barking to protect...
Read more...

The Amazing Truth About Wealth Inequality in America
The gap between haves and have-nots is a lot bigger than most people think, and it is only growing. This video, which uses powerful visuals to translate facts and figures into effective images,...
Read more...

5 Ways That SoFi Threatens Bank Of America
As an investor in Social Finance (SoFi), a San Francisco-based fintech startup, and customer of Bank of America, it's clear that the upstart is winning the consumer finance battle. Ever since the...
Read more...