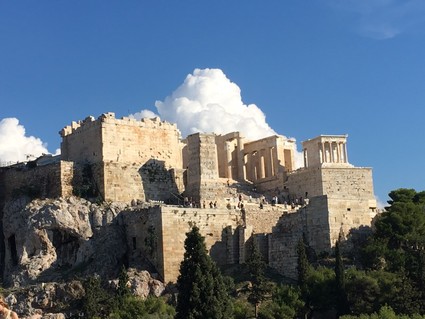 I just got back from the first ever Quiz Olympiad, organized by the International Quizzing Association and held in the Olympic cradle of Athens, Greece. It was an historic weekend!

Some background: the IQA has been holding these European and international quiz tournaments for many years, but I’ve only attended one: the 2007 European Quiz Championships in Blackpool, England. That event was held in a cheerfully rundown Basil Fawlty-style holiday hotel on a chilly November weekend, but we were warmly welcomed by our British hosts. I was completely charmed by the international flavor of the proceedings and the bewildering difficulty of much of the material.

The 2016 Quiz Olympiad, by contrast, was held in an upscale five-star hotel in central Athens, and was attended by over two hundred competitors from all over the world. Twenty nations were registered in the flagship event, the international teams quiz. I was there as the captain of Team USA, which brought over our largest-ever complement of sixteen players. Some were quiz show champs you might recognize from TV: Ed Toutant and Dave Legler, seven-figure winners on Who Wants to Be a Millionaire; Brandon Saunders from Million Second Quiz; Jeopardy! college champion Shane Whitlock; and Raj Dhuwalia, the all-time winner on GSN’s The Chase. Others, like Mark Ryder and Tim Polley, were just mild-mannered civilians who play IQA events remotely from the States, but are every bit as good as the names you know.

Here’s the thing to know about top-level European quiz: it’s an uphill climb for Americans. Our trivia canon privileges domestic history and culture to such a degree that it can be a shock to the American system when we’re suddenly expected to have an equal familiarity with Uzbek road cycling, Croatian medieval history, contemporary Iranian poetry, Cameroonian jazz-funk, and Monegasque oceanography (all actual examples from the Olympiad, by the way). The specialty quiz on history had maybe five questions out of fifty that covered American history, roughly the same distribution given over to the Scandinavians or the Balkans. Don’t get me wrong, this is the canon that makes sense for a mostly European field! But for America ever to really compete, we’re going to have to suck it up and watch some soccer or something.

Still, Team USA acquitted itself well. We only finished in the middle of the pack on the team quiz, but then two of us medaled in the specialist quizzes the next day (Brandon Saunders’s bronze in Digital Technology and my silver in Film). Shane took third in the knockout quiz, and Brandon and Tanay Kothari were gold and bronze in the speed quiz–evidently a young person’s game. Three of the top ten finishers in the pairs quiz (including Ed Toutant’s bronze with Belgium’s Nico Pattyn) had U.S. players aboard. Maybe the most impressive feat by an American was Raj Dhuwalia’s fifth-place finish in the individual quiz, just a few questions behind England’s big names. Only England, Belgium, and Norway finished with more medals than our six. (Complete information and standings here.) Putting on a big eight-event quiz weekend for hundreds of players in dozens of languages must be a logistical nightmare, but everything went off without a hitch, thanks to the hard work of Jane Allen and her IQA team. Events started and ended strictly on schedule, which is almost unheard of in my U.S. quiz tournaments experience. There was even down time for side trips to the Acropolis, the original 1896 Olympic stadium, and some nearby islands.

Sign me up for 2020, if I can pass the doping tests! If you think Team USA needs your skills as well, you can find out more about world quizzing events here.

In Russia, the problem of the impact of games on people is not yet a matter of national concern. The first thesis, dedicated to the psychological characteristics of "hardcore" (ie extremely passionate) online players, was only protected in 2012 ("Psychological characteristics of users of online games with varying degrees of gaming addiction"). Daria Rybaltovich for several years questioned gamers and came to the conclusion that with the increase in time spent in the game and the total playing experience, the person's personality begins to change. The new player "has increased mental activity and optimism, can be cheerful, active, enterprising and enterprising. Strives for leadership in any circumstances, but prefers to be an informal leader. " As you dive into virtual worlds, a person becomes "fearful and anxious, the level of working capacity decreases, excitability, quick temper, irritability, passivity, propensity to depression, and sometimes suicide, cyclothymic mood changes appear in a person."

A Game As Old As Empire

(500) Days of Trivia
I’m pleased to announce that the 500th installment of my weekly “Tuesday Trivia” quiz went out over the email last night. Five hundred weeks of free trivia, appearing in 16,000 inboxes every...
Read more...

The Dwarves
Dwarves, or gnomes, bearded krestyshy, beer lovers, axes and noble fights, with an enviable regularity become the main characters of video games - more often than the hated elves or orcs. There is...
Read more...

BK Business Fables: Driving
A State Police Officer sees a car puttering along at 22 MPH.  He thinks to himself "This driver is just as dangerous as a speeder!" So...
Read more...

How many trivia questions exist?
A reader named Anthony writes: I hope this message makes it to you. My friend and I are debating how one might estimate the number of trivia questions that exist. Or more precisely, how many...
Read more...

Stop Driving Yourself Crazy Trying to Hold People Accountable
I recently flew to New York City to meet with the head of one of the world’s largest wealth management companies. He told me he’d read my book, Why Motivating People Doesn’t Work… and What Does...
Read more...

To the old gods and the new
For the first time in seven months, there’s a new Junior Genius Guide on bookstore shelves today! The Junior Genius introduction to Ancient Egypt costs just a few bucks and it’s jam-packed with...
Read more...

Old fossil
I’m very happy to announce that the seventh Junior Genius book is available online and in bookstores today! The official Junior Genius Guides website has some preview pages to peruse and various...
Read more...

Around the Bend: Behaviors That Drive Your Coworkers Crazy
“Behavior is the mirror in which everyone shows their image.“—Johann Wolfgang von Goethe, German writer and statesman. In recent months, I’ve conducted Q&amp;A surveys via my Productivity Pro®...
Read more...