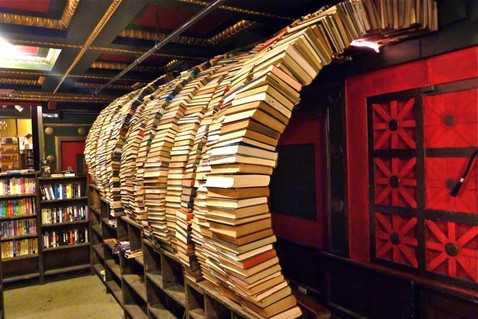 Reading: I recommend it! In fact, I specifically recommend the books I’ve been reading recently. They are not new books. (Wait, with one exception.) Here’s the last month or so:

The Robber Bridegroom by Eudora Welty. Did you know Welty’s first novel (well, short novel) was a Southern update of the Grimm’s fairy tale, along the lines of Joy Williams’s The Changeling, Angela Carter’s The Bloody Chamber, or Neil Gaiman’s Anything Ever Written by Neil Gaiman? I sure didn’t. Cameo guest appearance by Mike Fink.

The Intutionist by Colson Whitehead. Yes, it’s a (powerful) racial parable. But it’s also an amazing feat of urban fantasy invention, about a powerful guild of elevator inspectors and their competing philosophies of elevator inspection. A Ben Katchor strip come to life.

Patience by Daniel Clowes. I can’t honestly tell if this is his masterpiece or if I just think it is because it’s a murder mystery and a time travel story. This was virtually laboratory-engineered to be my favorite thing ever.

The Paradoxes of Mr. Pond by G. K. Chesterton. I loved the Father Brown stories, but didn’t know that Dover has a bunch of thin paperbacks keeping Chesterton’s other mystery series in print–many with Martin Gardner introductions! This one features a quiet bureaucrat prone to sphinx-link contradictory utterances, each leading to a mystery. The first story in this collection was a particular favorite of Borges.

The Comedians by Kliph Nesteroff. This is now the book on 20th-century American funny business. So many great stories here, from burlesque houses up to podcast garages.

Hard Rain Falling by Don Carpenter. Why did nobody tell me this book existed? A hard-boiled Beat novel, Pelecanos in Portland.

Unfaithful Music and Disappearing Ink by Elvis Costello. Like Dylan’s book, this is told out of order, which should be required in rock memoirs as far as I’m concerned. Not quite great enough to recommend to non-fans, but if you’ve followed Costello’s remarkable career, this is indispensable. Cameo guest appearance by Geraldo Rivera.

Family Grandstand and Family Sabbatical by Carol Ryrie Brink. Drudge Report siren! These charming 1950s children’s books, about the close-knit family of a university professor, are back in print thanks to the good graces of Seattle librarian Nancy Pearl. I’m reading them to my daughter now and they’re timeless.

The Complete Stories by Clarice Lispector. What a talent. I’m recommending this even though I’m pretty sure you will be left angry/baffled by at least every other story. I sure was.

Sneaky People by Thomas Berger. The Little Big Man guy, it turns out, wrote at least a dozen other very funny books, unknown outside his little cult. This was my first.

The Rings of Saturn by W. G. Sebald. Part novel, part travelogue, part throwback Victorian commonplace book. Like nothing else I’ve ever read. If all the nutty trivia ephemera stuff is made-up, please don’t tell me. Cameo guest appearance by Empress Dowager Tzu-hsi.

(I was also in The Last Bookstore last week, downtown L.A. as pictured.)

Nudiustertian
Nudiustertian(nu-di-uhs-ter-shi-uhn)adjective: Of or relating to the day before yesterday.No, it has nothing to do with nudity, though you probably thought it did, didn't you?"In publishing,...
Read more...

READ ANY BOOK IN 30 MINUTES OR LESS
Five Simple Steps to Reading and Absorbing Nonfiction Books in a Half Hour Does your nightstand or coffee table look like this? If so, I’ve got a professionally-tested way to clear this book...
Read more...

The Never-Nude
Franz Kafka frequented nudist resorts but refused to remove his trousers. He was, by all accounts, extremely self conscious and unhappy with his appearance. Nude spas were all the rage at one point...
Read more...

Arrange your bedroom furniture in the most stylish and smart way
The bedroom is the place where people go to rest after a long and tiring day. It is important to have an ambient and peaceful atmosphere in the bedroom in order to have peaceful sleep. But...
Read more...

The most stylish way to arrange your bedroom furniture
The bedroom is the place where people go to rest after a long and tiring day. It is important to have the ambient and peaceful atmosphere in the bedroom in order to have peaceful sleep. But...
Read more...

How to Arrange your bedroom furniture in the most stylish and smart way
The bedroom is the place where people go to rest after a long and tiring day. It is important to have the ambient and peaceful atmosphere in the bedroom in order to have peaceful sleep. But...
Read more...

Sustainability Offers Leading Manufacturers Path to ‘Flourish’ | Growth Strategies content from IndustryWeek
North America’s future in manufacturing will be fueled by innovation. Companies that can engage their workforce in sustainable, entrepreneurial endeavors can not only survive but...
Read more...

Moral Jujitsu
The following is a special, exclusive excerpt from Chapter Four of Pro-Voice-- How To Keep Listening When the World Wants a Fight.  It shows how simple human acts of love and support can confound...
Read more...