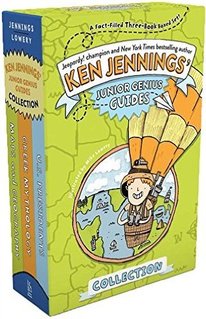 First up, there’s a new boxed set of the first three Junior Genius books (Maps and Geography, Greek Mythology, U.S. Presidents) available now at a discount price! It came out on Tuesday and actually I think I didn’t hear about it until a couple months ago.

If you never checked out the Junior Genius books, this is the way to go. (I linked to Amazon for the sake of convenience, but obviously you’re going to check out your local independent bookstore first if that is an option for you!) And coming soon: I’m told Barnes & Noble will eventually be stocking a new jacketed edition of my Trivia Almanac from back in the day. When I heard about this deal, I asked if this was a chance to update errors in the text, and Random House said okay! So good news, there’s going to be a new printing of the Almanac with dozens of angry-reader-spotted errors corrected! (Yikes, I really need to update that page with the latest crop.)

While going through the almanac, I was shocked to discover (a) how unnecessarily hard it was in spots, and (b) how poorly some of the questions have aged. I fixed the second thing but not the first. Begone, questions about Cindy Sheehan, Footballers’ Wives, and Mystikal! Why were you there in the first place? There were probably a hundred or so questions whose answers were correct in 2007 but no longer (sports records that got broken, political terms that ended, Subway spokespeople who were disgraced, etc.) and those got fixed as well.

Please burn your old copies of the Almanac and rush to America’s last chain bookstore for your last chance ever at a (momentarily) up-to-date version!

The Will to Make a Difference
In recent years, we have all watched once-promising careers go up in smoke. Business life has been changed in ways once unimagined, since the advent of the global marketplace, a fragile economy,...
Read more...

How to Build an Agile Workforce
Nowadays most of the companies realize talent management to be as important as other organizational functions to sustain and grow a business. But many of them still need to realize that they...
Read more...

Fly-by-Night FAA Aviation Safety Given a Second Wind by Whistleblower Reprisal
The case of aviation safety and consumer protection champion Kim Farrington suggests that, for federal workers, there is no statute of limitations on having done the right thing ahead of the...
Read more...