The other Junior Genius 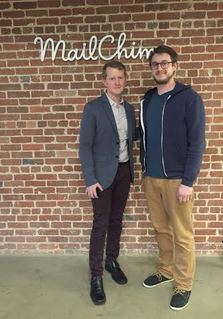 Let’s face it: the seven Junior Genius books I spent the last few years writing would have been maybe one-quarter as good without the funny, charming artwork of Mike Lowery. You know what kids don’t want? Big unbroken blocks of text about 19th-century presidents. You know what kids do want? Funny cartoons of Andrew Jackson hitting some dude over the head with a cane.

But despite our two-year collaboration, which sometimes included detailed back-and-forth on illustration ideas, Mike and had never met! I live in Seattle; he lives in Atlanta. It’s harder to get farther apart than we are and still live in the continental United States.

A couple weeks away I was invited to visit the headquarters of Mailchimp, the company that helps deliver 17,000 Tuesday Trivia e-mails for me every week. MailChimp is in Atlanta! I e-mailed Mike immediately (not with MailChimp, just the regular way) and at first he thought he was teaching a class that morning and wouldn’t be able to meet up. Ships in the night. But look who I ran into in the MailChimp elevator that morning!

Mike even sketched something quickly for me while I was talking, what a guy. Pretty lame of me to ask, I guess, since he draws for a living. That would be like him asking me to write him some trivia for free. Larry Gelbart used to say that he never met Murray Schisgal, with whom he shared a co-writer credit on Tootsie, until they began accepting statuettes together at awards ceremonies. I’m happy that I no longer have to tell children that I’ve never met Mike! Instead I can say that he is a very nice man, and carries Chinese hotel stationery around with him for some reason.

Using Writing to Generate Your Best Ideas, Insight, and Content

The Genius of Opposites

How Introverts and Extroverts Achieve Extraordinary Results Together

Genius Unseen
There has long been a rumor that most publishers and agents wouldn't know good writing if it hit them over the head. While this is true in some cases and false in others --as it is with all things,...
Read more...

Creative friction, framing it up and other lessons from Genius Opposites
Dave Summers, Director, Digital Media Production at the American Management Association and I  recently sat down at AMA headquarters in NYC. He interviewed me about The Genius of Opposites:...
Read more...

A Shout Out To Genius Bloggers
l have been involved in four book launches over the last ten years.   Though the tactics and strategies have changed dramatically the basic success strategy remains the same: Gather fans;...
Read more...

Social Leftists and Other Bogeymen Are Rampaging the Country
New Orleans    There are a lot of things that conservatives are worried about these days, and it turns out the list is unimaginably long. It’s not just whether or not uppity abortion crazed...
Read more...

Other Subsidary Rights
What Book Rights Do We Sell Besides Foreign Rights? Electronic Rights: These are not to be confused with the distribution of a book in electronic format (e-book). We talk about electronic rights...
Read more...

Can we ever be clear with each other?
Over the past couple of months I have come across Gervase Bushe’s Clear Leadership method being promoted by a number of OD practitioners and institutions, so I thought it would be worth spending...
Read more...

How Sharing Your Life Challenges With Others Can Change the World
I live in a small New England town that is home to only about 18,000 residents. As in many small towns, hundreds of children attend the public school system, play sports, and participate in art...
Read more...

Data USA, Happy Americans, and Hating Each Other
New Orleans    Here’s some good news, assuming you want to hear some. An MIT computer lab working with the financial and consulting firm, Deloitte, put together a website called Data USA which...
Read more...