The worst man in the world 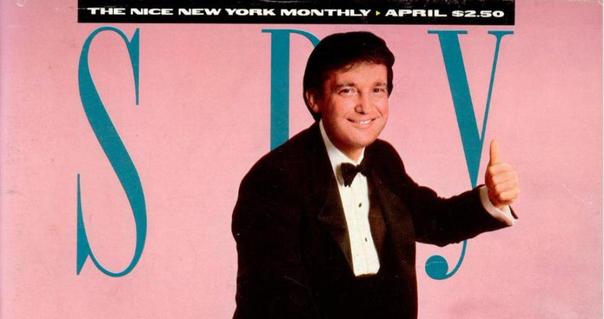 When Time magazine named President-elect (!!!) Donald Trump its “Person of the Year” last week, I tweeted

Trump is the only Time Person of the Year who was also Spy magazine's worst person of the year (1995).

That’s not a joke, as you might have guessed if you recall the steady stream of Spy magazine nostalgia on this blog over the years. The late, lamented satire magazine always ran a year-in-review piece called “The Spy 100,” a rundown of the “most annoying, alarming, and appalling” people, places, and things of the year. I felt confident that Trump was the only person to earn both magazine honors, but wanted to double-check that Spy never anointed George H. W. Bush, on whom they were always way harder even than they were on Reagan. So I hit the back issues to make sure.

At first I was surprised to see that Trump never topped any of the ’80s lists, during the magazine’s early “funny years.” Even though he wasn’t in the #1 spot, though, he was ever-present. Spy loved hating Trump. He appears no fewer than five times on the 1988 list, for example (in different roles, including–presciently!–“Donald Trump, Candidate”). And on the 1989 list, Trump never appeared, but the 100 other entries were each assigned a TrumpScore, measuring the closeness of their relationship to Spy‘s great orange whale. (The TrumpScore, T, was added to the official Spy 100 equation, alongside other variables like L, Inherent Loathsomeness, and M, Misdeeds.)

I had pretty much given up when I got to 1995, and was surprised to find Trump, at a low point in relevance, for some reason topping the list! I assume Spy‘s new bosses were trying to recapture the glory days of their 1980s Trump feud.

Since there’s no online list anywhere that I could find, here as a public service are the “winners” at the top of the Spy 100 during every year of the magazine’s lifespan. You can really see the 1992-1993 dividing line when new editorial took over and the magazine stopped being good.

Can Finance Save the World?

Regaining Power over Money to Serve the Common Good

Shaping Our Futures Through Conversations That Matter

The 5 Worst Types of Coffee Customers
1.The Uncaffeinated Cyborgs These are the people who find solace in a screen when the world is just too much to handle before a morning fix. Whether they are killing time with Candy Crush, or...
Read more...

The 10 WORST Popular Leadership Quotes
Great leadership quotes inspire and guide us. They become part of our mainstream language and instilled in our culture. We accept them as a reflection of the ideal, aspire to live them and use...
Read more...

The Worst Guitar Solo. Ever.
Youtube guarantees that as long as there's someone with a camera phone within five yards of you, anything you do can be filmed and posted to humiliate you for the rest of your life. But some...
Read more...

The World's Most Talented Man
Advertised everywhere as the, yes, THE MOST TALENTED MAN IN THE WORLD, this young fellow (who is actually a Shaolin monk or was trained as one) does have a whole range of skills.
Read more...

The World Is Enough
Feel Weighted Down By Too Much Stuff? By the age of 30 Graham Hill sold an Internet design company for $10 million. He did what most people would do with all that extra money, he bought stuff...
Read more...

Wayne’s World
Image Source by Bill Treasurer Wayne Bland sounds apologetic as he recounts the story, fully aware of its absurdity. He cites his failed suicide attempt as the reason he’s able to make such a...
Read more...

The US Cities with the Best and Worst Job Opportunities In 2015
If you decide to move from your current city to another, will you earn a higher or lower salary? Many professionals think that if they go to a larger city, they’ll receive a higher salary and more...
Read more...

Is “Business Class” the New Aristocracy?
Image Source: Tulane University Five Reasons Why the MBA Rule is Bad For Companies and Countries Wisdom from Managers Not MBAs: A hard look at the soft practice of managing and management...
Read more...

The Darker Side of Whistleblower Retaliation: What's the World Coming to?
A whistleblower attorney “provided police officials with an external hard drive for them to load with e-mail and other data responding to his discovery request. When he got it back, he found...
Read more...

The Ten Worst Apps Ever