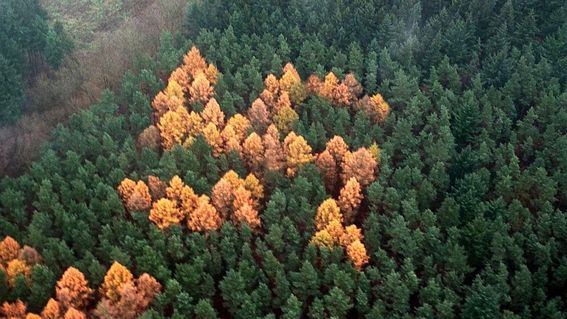 This site, like a lazy Frenchman, took the summer off. That was partly due to some database crashes and spambot attacks that happened when I was out of town, and which I’m just getting around to fixing now. Thank you for your patience.

I write a weekly Monday column called Maphead for Condé Nast Traveller, where I (virtually) visit the world’s geographic oddities. Here’s a special bonus “Maphead” that got vetoed over the summer by Condé Nast, because the photo editor (quite reasonably!) has a “no swastikas” rule.

This blog, while definitely not pro-swastika, is willing to take them on a case-by-case basis. Here’s the geography lesson that was too edgy for Big Content!

In 1992, a landscaping intern in northeastern Germany was given a boring task by his bosses: to scour aerial photographs of the region for irrigation lines. But then he came across photo 106/88, showing the Kutzerower Heath northwest of the village of Zernikow, and his jaw dropped. “Do you see what this is?” he asked his boss. Günter Reschke had just uncovered a previously unknown chapter in the history of Nazi Germany, hiding in plain sight.

A ghost of the Third Reich makes its yearly return.
The photo quite clearly showed a giant yellow swastika, 200 feet on a side, in the middle of a dense pine forest. Forester Klaus Göricke, dispatched to check out the site, found that the Nazi symbol was formed from 140 larches, planted with typical German precision. For most of the year, the trees were invisible. But for a few weeks every autumn, before the larches lost their leaves, they turned a bright yellow, in stark contrast to the surrounding evergreens.

For half a century, no one saw the forest for the trees.
From the size of the larches, Göricke deduced that they’d been planted in the late 1930s. Every year for more than half a century, a yellow swastika had faded onto the map here north of Berlin, then disappeared a few weeks later. In East Germany, low-flying private planes were forbidden, so no one had noticed. When pressed, locals remembered different stories about who had planted the trees: Was it to thank the government laborers who had worked on a street in town nearby? To disavow a local villager who’d been taken to a concentration camp for listening to the BBC? To celebrate Hitler’s birthday? Nobody is sure to this day.

It took eight years to fix the problematic landscaping.
With the swastika making worldwide headlines, the German government acted quickly, sending in local forestry workers to chainsaw the trees out of existence. They cut down forty larches, but to no avail. When fall came, the swastika was still visible, if a little ragged around the edges. Since the Brandenburg region was seeing an uptick in neo-Nazi violence at the time, this didn’t look good. On December 4, 2000, the fascist trees were hacked to bare stumps.

The Nazi trees are everywhere! Keep watching the leaves!
But the Zernikow larches were only the beginning. Armed with better imagery in the digital mapping age, Germans began finding arboreal Nazi artifacts all over. A deciduous forest in Wiesbaden was discovered to have a swastika of Douglas firs hiding in it, which emerged every winter, a sort of of reverse of the Zernikow grove. The most puzzling find was an entire swastika-shaped forest in remote Kyrgyzstan, of all places. Was the forest planted as a show of German-Russian solidarity in the days before the war? Or by German POWs a few years later? Or by some pro-Nazi nutjob during the Cold War? The mystery of the forest swastikas still has journalists…stumped.

They Just Don't Get It!

Living in More Than One World

How Peter Drucker's Wisdom Can Inspire and Transform Your Life

Heeding the Warnings
Eknath Easwaran, the wisest man I had the privilege of knowing in my life, once said, “There is no nation, no matter how powerful, that cannot be destroyed by hate.” The latest tragedy – and I...
Read more...

Warnings from Whistleblowers
What the Government Hasn't Told You By Kathryn Schuyler Since June 2013, when Edward Snowden first leaked NSA secrets to the press, there has been a flurry of concern among...
Read more...

The Racist
A racist is drinking in a bar. He notices a Black man sitting at a table nearby and doesn't like it. "Bartender!" he says, nodding at the Black man, "A round of the good stuff for everyone...except...
Read more...

China’s Economy: A Warning and a Promise
By John Perkins This December and January I will be taking groups of people on sacred journeys to Latin America. There are still a few spots available. See below for more information. The...
Read more...

Warning: Ignoring wins will bog you down
This week Mike Edwards joins us from his blog with a post about wins. Over the past couple weeks I have found myself to be in a rut. Almost a bad mood of sorts. Given all the work I’ve done in...
Read more...

Gas prices, the dollar, and a warning about the future trade deficit
I enjoyed Neil Irwin’s recent piece of the dynamics between the strong dollar and cheap gas in the US macroeconomy. The issues Neil raises pose both an interesting question and a worrisome...
Read more...

Drucker's Wisdom: Five Nuggets
Peter Drucker, who died in 2005 at 95, was known as “the father of modern management.” Bruce Rosenstein interviewed and wrote about Drucker both for USA TODAY and his new book Living in More...
Read more...

Housing Discrimination is Back! Did it Ever Leave?
New Orleans      The Community Reinvestment Act (CRA) was passed in 1978 banning racial discrimination in lending.  The Home Mortgage Disclosure Act (HMDA) was passed as well, forcing banks to...
Read more...

The Five Jobs People Leave the Quickest
Bev Kaye and Sharon Jordan-Evans discuss in their new book the subject and practice of stay interviews. Stay interviews are conducted with current employees  to take note of their current...
Read more...

People Don’t Resist Change
Making change happen in organizations would be a lot easier if there weren’t those pesky resistors. There are the angry types filled with long memories of pain. There are the pessimistic types...
Read more...