Ask Me Anything with TerraCycle's Tom Szaky (A BK Webinar)

Madeline Coates is an English major at Westmont college and the former Digital and Editorial Intern at Berrett-Koehler. 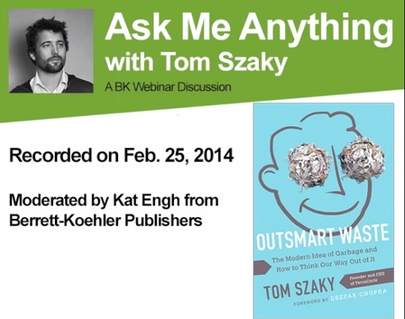 Previously recorded live with video of the author February 25, 2014.

A follow-up to a previous webinar, this talk with TerraCycle founder and CEO Tom Szaky digs deeper into the concept of garbage, and explains why the problem of waste is a solvable one: it's all a matter of perspective.

Everything eventually becomes waste: your coffee cup, the chair you're sitting in, the building around you, but "garbage" is an entirely different matter. The modern idea of garbage, Szaky reveals, has only been around for about a century, and began with the introduction of complex materials such as plastic. Since then, consumption has grown rapidly; humans currently consume 10 times more than our great-great grandparents.

Realizing that waste is a recent issue makes the problem easier to tackle, and TerraCycle is one company working to combat it. Szaky is quick to clarify, however, that TerraCycle is not a solution to the waste problem; it is simply a countermeasure, like medicine taken to treat an illness. The real question, he says, is not "What is the better pill?" but rather, "How did we get sick in the first place?" Eventually, Szaky hopes for a world where programs like TerraCycle are no longer necessary, but until that time comes, he will continue to promote sustainable and self-aware consumption.

The Future of Packaging

From Linear to Circular

Press Release | Belva Davis
Never in my Wildest Dreams A Black Woman’s Life in Journalism Belva Davis with Vicki Haddock “No people can say they understand the times in which they have...
Read more...