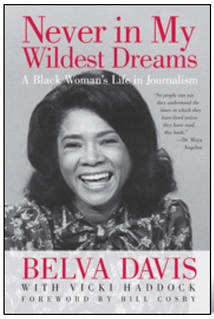 Never in my Wildest Dreams

A Black Woman’s Life in Journalism

“No people can say they understand the times in which they have lived unless they have read this book.” --Maya Angelou

“Belva Davis was someone who sustained us, who made us proud …She was the first woman of color that many viewers came to know and trust, and she met that challenge with integrity and dignity and grace.” --Bill Cosby

As the first black female television journalist in the western United States, Belva Davis overcame the obstacles of racism and sexism, and helped change the face and focus of television news. Now she is sharing the story of her extraordinary life in her poignantly honest memoir, Never in my Wildest Dreams.

A reporter for almost five decades, Davis is no stranger to adversity. Born to a fifteen-year-old Louisiana laundress during the Great Depression, and raised in the overcrowded projects of Oakland, California, Davis suffered abuse, battled rejection, and persevered to achieve a career beyond her imagination. She has seen the world change in ways she never could have envisioned, from being verbally and physically attacked while reporting on the 1964 Republic National Convention in San Francisco to witnessing the historic election of Barack Obama in 2008.

Davis has reported many of the most explosive stories of the era, including the Vietnam War protests, the Black Panthers, the People’s Temple cult mass suicides at Jonestown, the assassinations of San Francisco Mayor George Moscone and Supervisor Harvey Milk, the onset of the AIDS epidemic-- and from Africa, the aftermath of the terrorist attacks that first put Osama bin Laden on the FBI’s Most Wanted List.

During her career, she soldiered in the trenches in the battle for racial equality and brought stories of black Americans out of the shadows and into the light of day. Now in her seventies, Davis, the ‚“Walter Cronkite of the Bay Area, ‚” hosts a weekly news roundtable and special reports at KQED, one of the nation’s leading PBS stations. In this way she has remained relevant and engaged in the stories of today, while offering her anecdote-rich perspective on the decades that have shaped us.

Belva Davis has received eight local Emmys and many other awards, including honors from the International Women ’s Media Foundation, the National Association of Black Journalists, and the Northern California chapter of the National Academy of Television Arts & Sciences. She is profiled in the Newseum, the world’s first interactive museum of news. She has traveled the world reporting on politics, terrorism, and racial and gender issues, and has anchored news programs at three major network affiliates. Davis continues to host a weekly news roundtable and special reports at KQED, one of the nation’s leading PBS stations.

Vicki Haddock is a journalist and was a senior writer at the San Francisco Chronicle as well as a reporter and assistant city desk editor for the San Francisco Examiner. Before joining the Examiner, she was chief political writer for the Oakland Tribune.

Never in My Wildest Dreams

A Black Woman's Life in Journalism

Realizing the Market Value of Leadership