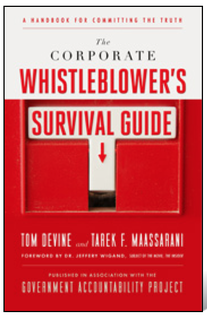 San Francisco, CA - From Erin Brockovich to Enron, whistleblowers ‚“challenge abuses of power that betray the public trust. ‚” They have proven to be an unfortunate necessity in modern business culture. Their efforts to report crimes, fraud, and dangers to public health and safety have saved millions of lives and billions of dollars of shareholder value. Had we heeded the warnings of whistleblowers, disasters such as the Enron implosion, Bernie Madoff investment scandal and the Lehman Brothers meltdown could have been averted.

The Corporate Whistleblower’s Survival Guide (Berrett-Koehler, April 2011; $19.95; 978-1-60509-986-6) by the Government Accountability Project (GAP) aims to be the first book, and affordable to boot, to help potential whistleblowers understand exactly what they are getting into and help develop proactive strategies to both make a difference and survive. The book provides advice on making the right decision for a life’s crossroad choice, getting help and finding allies, warns what retaliation measures may occur, gives a street law course on available legal rights, and offers a tutorial on using these resources to weather the inevitable storm. The Corporate Whistleblower’s Survival Guide details the full legal picture for whistleblowers through the 2010 health reform, financial reform and food safety legislation, among the twelve include new laws since 2000 that have created a legal revolution in rights for corporate whistleblowers.

A 2007 PricewaterhouseCoopers global crime survey of more than 5,400 corporations in 40 countries found that over 40 percent had been victimized by one of more serious economic crimes and that 80 percent of the group reported damages or significant damage to their institutions. Had employees felt confident that their concerns would be heard, these damages might have been avoided.

Rarely do whistleblowers want to break ranks with their employer or risk being exiled in the workplace. A 2009 National Business Ethics Survey found that only 4 percent of whistleblowers make their disclosures outside the corporate systems, and only 3 percent to hotlines; 46 percent went to their supervisor.

Whistle Where You Work This Year

The perception of whistleblowers has drastically changed in the last 34 years since GAP was founded. No longer seen as  "traitors" whistleblowers now shoot to the public spotlight as Sherron Watkins and Cynthia Cooper who joined FBI attorney Colleen Rowley did when they became the 2002 Persons of the Year. Recent federal legislation in finance and health reform have cemented legal protections and mechanisms for whistleblowing. The Obama administration has appointed the strongest, most experienced team in history to enforce corporate whistleblower laws through administrative adjudication.

About The Government Accountability Project

Founded in 1977, the Government Accountability Project is the nation’s leading whistleblower protection and advocacy organization. GAP’s mission is to promote corporate and government accountability by protecting whistleblowers, advancing occupational free speech, and empowering citizen activists. Located in Washington, DC, GAP is a nonprofit 501(c)(3), nonpartisan, public interest organization with an operating budget of around $2.7 million. In addition to focusing on whistleblower support, GAP leads campaigns to enact whistleblower protection laws both domestically and internationally. GAP also conducts an accredited legal clinic for law students, and offers a fellows and internship program year-round.

Tom Devine is legal director of the Government Accountability Project, where he has worked to assist thousands of whistleblowers to come forward. He has been involved in the all of the campaigns to pass or defend major whistleblower laws over the last two decades. He is a frequent expert commentator on television and radio talk shows. Devine is the recipient of the ‚“Hugh Hefner First Amendment Award, ‚” the ‚“Defender of the Constitution Award ‚” bestowed by the Fund for Constitutional Government. and was named to the Freedom of Information Act Hall of Fame. Author Residence: Washington, D.C.

Tarek Maassarani is a practicing attorney and a former litigator with the Government Accountability Project. He is an adjunct professor at George Washington University, teaching in the areas of nonviolent communication and human rights. Author Residence: Washington, D.C.

Dr. Jeffrey Wigand , who authored the book’s foreward, is a tobacco industry whistleblower who achieved national recognition in 1995 when he was the highest ranking former executive to address public health and smoking issues. He now works to combat teen tobacco use through his nonprofit organization, Smoke-Free Kids.

A Handbook for Committing the Truth

Press Release | Belva Davis
Never in my Wildest Dreams A Black Woman’s Life in Journalism Belva Davis with Vicki Haddock “No people can say they understand the times in which they have...
Read more...