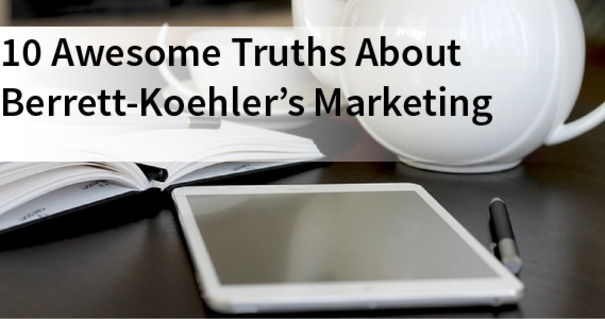 1. Multichannel Marketing and Sales. Unlike many publishers that rely on just a few marketing channels, BK markets and sells our publications through dozens of different channels, including distributors around the world, bookstores, wholesalers, libraries, direct mailings to target audiences, e-marketing, publicity to media contacts, catalogs, social media, the BK Communiqu ƒ © e-newsletter, Amazon.com and other internet sites, BK’s own websites, corporate and organizational sales, other special sales, author events, conference exhibits, award nominations, foreign rights sales, other subsidiary rights sales, college textbook sales, the BK Affiliate Network Program, the BK Book Club, and marketing partnerships with other organizations. This increases each publication’s chance to succeed because each has many diverse channels in which to find a market.

2. Strong Direct Marketing Outreach. Whereas many of BK’s competitors do little or no direct marketing of their publications (relying instead just on increasingly crowded resale channels), BK has always marketed directly both to our own lists of bookbuyers accumulated over the years and to specialized outside lists. Each book is marketed through both print mailings and digital mailings to target groups of potential customers. And each new book is featured in the BK Communiqu ƒ © e-newsletter, which many people say is the best newsletter from any publisher and the only one they regularly read.

3. Digital Leadership. Publishers Weekly, in its annual story (May 23, 2011) about business book publishing, stated: “The publisher putting the most concerted focus on digital developments in the business book category is the independent, California-based Berrett-Koehler.” We began selling e-books in 2000 and have made many large investments in digital publishing, digital marketing, and digital sales since then, such as creating a digital community building function in 2007. We’ve also benefitted from being close to Silicon Valley, and we are staying in the digital forefront. For example, when Apple launched the iPad and iBookstore, BK was one of seven publishers in the world whose books were available on those platforms on day one. And when Google eBooks was launched, BK had over 500 publications available on day one.

5. Subsidiary Rights Powerhouse. BK has already made over 1,900 foreign-language rights sales as well as 500 other subsidiary rights sales (including audio sales, video sales, film sales, and book club sales). Over 60 of our titles have been translated into 10 or more languages. Each new BK publication has a far higher likelihood of being published in multiple languages than is the case for most other publishers’ books. We have close relationships with publishers in many countries, an extensive network of international agents representing our books, and world-class subsidiary rights staff and systems.

6. Far-Reaching Community Support. BK authors become part of a community of authors and readers who help spread the word about BK publications, recommend BK publications to their contact lists, write about BK publications in their blogs and articles, and support BK’s mission of “Creating a World That Works for All.” The ultimate support for BK authors is the amazing BK Authors Cooperative, which is a one-of-a-kind such organization in the world. The Co-op gives BK authors far-reaching advantages because authors help each other in numerous ways to increase their success and impact.

7. Individual Attention to Each Author and Each Book. The economics of book publishing are very challenging, and many publishers try to cope by seeking to minimize interactions with authors; as a result, authors often feel that they are treated like nuisances and that their books receive little attention. In contrast, we view BK and authors as partners who are working together to make a difference in the world, and we collaborate closely with each author on each book. One of our signature ways of doing this is the Author Day that launches each new book. This unique event allows authors to interact with the entire BK staff and to work directly with our editorial, design and production, sales and marketing, and digital community building teams to help each book succeed.

8. Large Marketing Investment. Multichannel marketing, individual attention to each book, and the other marketing emphases described above require a lot of time and money. As a result, BK devotes over 20 percent of our revenues to sales and marketing, which is far above publishing industry averages. A big part of this investment is having 12 BK staff members (in addition to our outside sales forces and our marketing agents around the world) involved in marketing the 30 to 40 new books we publish each year, which is more than double the typical publishing ratio of marketing staff to books published. For example, it is common for each publicist at other companies to handle 50 to 100 new books each year, whereas each BK publicist handles 15 to 20 new books each year.

9. We Do What We Say We Will Do. Authors are frequently disillusioned when their publishers fail to follow through on their marketing plans. BK charts a course of integrity by (a) spelling out clearly, specifically, and realistically what we will do and not do to market each book; (b) doing everything that we said we would do; and (c) reporting back to authors that we have done what we said we would do and the results of those efforts. BK has created systems for reliably following through on all these steps with great consistency, which is a commitment and competency that few publishers display.

10. Extensive Support to Authors. Despite all that BK does to market and sell books, authors’ own marketing and sales efforts are still usually the biggest drivers of book sales. BK opens channels through which books can sell, but whether books sell in those channels depends largely on authors’ efforts. This is a marketplace reality for most publishers. But what distinguishes BK is that we provide much more assistance to authors than do most publishers to help authors succeed. This starts with being upfront about what is really going on in the marketplace and how authors’ and BK’s efforts will affect sales. It continues with BK providing more training, resources, and support than other publishers do to help authors be smart and effective in their marketing efforts. It continues with BK being open, candid, and timely in sharing information that can help authors make wise decisions. And it continues with BK being exceptionally reliable about such matters as meeting our schedules and helping get books to authors’ events.

Bringing Your Soul to Work

The Power of Spirit