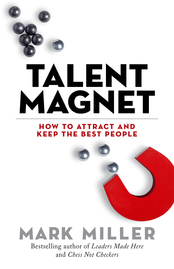 How to Attract and Keep the Best People

What Does Top Talent Really Want?

More than vision, strategy, creativity, marketing, finance, or even technology, it is ultimately people that determine organizational success. That's why virtually every organization wants more top talent. But do you know what they're looking for? It might not be what you think! Talent Magnet will show you how to attract and keep great people.

$22.95
(member price: $20.66)
Free shipping on all orders from the BK Publishers store.
Or find a local bookseller with Indiebound.

What Does Top Talent Really Want?

More than vision, strategy, creativity, marketing, finance, or even technology, it is ultimately people that determine organizational success. That's why virtually every organization wants more top talent. But do you know what they're looking for? It might not be what you think! Talent Magnet will show you how to attract and keep great people.


Visit Author Page - Mark MillerMark Miller is currently serving as vice president, organizational effectiveness, at Chick-fil-A, Inc. He is also the author of The Heart of Leadership, The Secret of Teams, and, with Ken Blanchard, Great Leaders Grow. His blog, GreatLeadersServe.org, is rated as one of the top leadership sites in the world.

The War for Talent
Do Something
Top Talent
Why Top Talent?
The Search
Huddle Time
Panning for Gold
More Than a Job
Diamonds in the Rough
Breakthrough
Risky Business
Lesson Learned
The Answer
Next Steps
A Better Boss
Why Not?
A Brighter Future
Validation
A Bigger Vision
Do it Now
Tell the Story
Launch
Celebrate!

The War for Talent

“How could this be happening?” Blake thought.

He had just walked out of a meeting with his Human Resources team. They had informed him they would not be able to staff the company’s near-term plans and suggested to Blake he reduce the organization’s growth goals. They could see no way to find enough qualified people to hit their targets. The shortfall was large—and growing.

His team explained the elements of a perfect storm—a mix of economic, demographic, and competitive pressures all coming to bear simultaneously. The result: they had been thrust into the ‘war for talent.’

Blake was not used to this type of news. Since becoming the CEO, his early decision to build a high-performance organization had paid huge dividends. All the outcome metrics had continued to climb. This new information could change everything. Blake knew people were central to their success. Suddenly, over the course of one short meeting, people had now become his greatest point of vulnerability.

Although the recommendation of his team was unexpected, if Blake was totally honest with himself, the early warning signs of an impending storm had been in the air for months. A combination of his optimism, overdelegation, and busyness had prevented him from connecting the dots sooner.

A combination of his optimism, overdelegation, and busyness had prevented him from connecting the dots sooner.

As he reflected on what he had missed, he remembered losing several key people recently. More troubling, he recalled each of the top candidates for their replacements declined offers to join his organization. And, to make matters worse, he could also recall a few clues that their talent pipeline was looking more like a dripping faucet. For example, Blake wrote personal notes to new employees; he hadn’t been asked to write as many in the previous months.

What Blake had once considered a Human Resources issue had now clearly become his issue. He couldn’t help but wonder if perhaps he should have taken a bigger interest in this topic years ago.

As Blake walked to his car, his thoughts shifted to the dinner he was about to attend. It was a peer-mentoring group—eight CEOs from a diverse set of businesses. Tonight would be their first meeting. Potential discussion topics had been submitted in advance to the moderator. As he drove to the event, he wondered what the group would address. He had submitted three potential topics; unfortunately, staffing was not one of them.

Over dinner, the attendees engaged in casual conversation and introductions. In addition to ethnic, gender, and age diversity, these leaders represented industries from totally different sectors: high tech, manufacturing, retail, hospitality, construction, education, healthcare, and even a global nonprofit organization.

As dessert was bring served, Martha Livingston called the group to order. “Welcome,” she said with a warm, inviting smile. “Thanks for agreeing to be part of this experiment. My hypothesis is simple: we can learn from each other. Tonight is our first opportunity to see if I’m right or not.

“As we discussed previously via email, we will address one topic per meeting. The objective is to share what we’re learning about a given issue. Tonight, based on an overwhelming level of interest, we’re going to talk about how to find and keep talented people.”

Blake breathed a sigh of relief.

Martha continued, “I’ll kick off the conversation. I’ve been in business for forty-five years, and this may be the biggest talent mess I have ever seen. If we can’t crack the code soon, we’re going to have to slow our growth plans.”

Bart Elkridge nodded his head and agreed. “I can get people,” he said. “People aren’t the problem. It’s the caliber of people I worry about. Ours is a complicated business. Not just anyone can, or is willing, to do the hard work we require.”

I can get people. People aren’t the problem. It’s the caliber of people I worry about.

One by one the attendees spoke, each addressing the problem but no one offering any solutions.

“Hi, I’m Blake. It’s been energizing to hear from each of you. I’m the least experienced guy here. I’ve only been in my role about a decade, and I’ve never seen the talent challenge this bad. But, here’s my view: The world is still full of talented men and women. Some of you referred to them as A players. They still want to work and are eager to contribute. Why don’t we go get them?”

Martha responded, “Blake, I love your spirit. That is why we’re here—to find answers, not just to commiserate. What do you suggest we do?”

“I’m not sure. But I am committed to doing something,” Blake said. Several others nodded in agreement. “I’m going to engage my staff to work on some potential solutions.”

“Haven’t you done that already?” Betsy Roberson, head of the global nonprofit, asked.

“Not really,” Blake confessed. “I knew it was an emerging issue, but until recently, I was unaware of the magnitude of the situation. Honestly, when Martha announced our topic for tonight, I was hoping one of you had already figured it out.”

“Nope!” Bart laughed. “I was hoping the same thing. That’s why it was number one on my list.”

“No answers,” Martha sighed, “but at least we had a good dinner.”

“I know we agreed to address a different topic at each meeting, but could we talk about this again next month?” Blake asked.

“Only if you guys bring some solutions,” Martha said in a tone that made the group feel they all had homework to do.

At home, Blake’s son Clint opened the handwritten letter. It arrived looking like the more than 7,000 miles it had traveled, dusty and crumpled on the edges. He knew immediately it was from his friend Baako—the primitive block letters composing the address were the final clue. The two had met on a school trip last spring.

Clint was only sixteen, but thanks to his father’s influence and insistence, he already had done more than most his age. One of the adventures Blake had sponsored for his son was to travel to an emerging country. Blake’s father had placed a high priority on global awareness and had done the same for him when he was a teenager. A consequence of this exposure was a level of compassion and empathy hard to get any other way.

As Clint read the letter, his eyes filled with tears.

“My little sister Amara died today. I wanted to tell you. She considered you a friend. They say it was the water that killed her. . . .”

Clint thought, “How can that be? The water? How is that possible?”

In an instant he remembered, there was no water in Amara’s village. She walked several hours every day to find water. Clint’s pain intensified when he realized she probably had carried the contaminated water that took her life.

He was angry, frustrated, and confused all wrapped up together. He knew he couldn’t help Amara, but he also knew he had to do something.

Blake was driving home from dinner with the CEOs when he received the call from Clint telling him about his letter from Baako and Amara’s death.

“I understand. I know you want to do something. Of course, I’ll help. Tomorrow’s Saturday. Let’s you and I go out for breakfast and talk about options.”

“The war for talent is on, and many good leaders and organizations are really struggling. Talent Magnet presents a terrific approach that is both insightful and actionable—born out of firsthand research and told through a readable and relatable story. I read it straight through.”
—Stephen M. R. Covey, New York Times and #1 Wall Street Journal bestselling author of The Speed of Trust and coauthor of Smart Trust

“People drive your success more than anything else, and Mark Miller shows us how to attract the best of them to your company.”
—Randy Street, New York Times bestselling coauthor of Who

“Mark provides a pragmatic approach to the art of attracting and retaining top talent by inviting us to step back and connect with hearts and minds. A must-read for leaders who are looking to transform organizational talent and performance across all generations and industries.”
—Candice L. Saunders, President and CEO, WellStar Health System

“Great people are going to work somewhere—why not for you? Talent Magnet will show you how to attract the people every organization wants. Read it to take your team and organization to the next level.”
—Jon Gordon, bestselling author of The Power of Positive Leadership

“In the area of work and talent, one concern has risen to the top—the battle for talent. In Talent Magnet, Mark Miller masterfully takes you through two journeys of discovery that merge to offer the reader unique insights from both sides of the top talent coin.”
—Louis Richardson, Chief Storyteller, Watson Customer Engagement, IBM