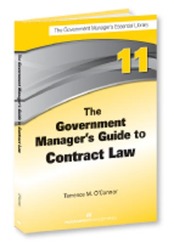 This practical volume offers clear and helpful guidance on the laws governing federal contracts. From information on the types of contracts used in government to ways to interpret those contracts, the book covers the basics that every government manager needs to know. Information on complying with ethics requirements in general, and in the solicitation process and contract administration in particular, is especially pertinent. The author also explains the government manager's liability both to the government and to the public. This book covers all the aspects of contract law that every government manager should know to be both effective and in compliance.

Book Details
Overview
This practical volume offers clear and helpful guidance on the laws governing federal contracts. From information on the types of contracts used in government to ways to interpret those contracts, the book covers the basics that every government manager needs to know. Information on complying with ethics requirements in general, and in the solicitation process and contract administration in particular, is especially pertinent. The author also explains the government manager's liability both to the government and to the public. This book covers all the aspects of contract law that every government manager should know to be both effective and in compliance.
About the Author
Terrence M. O'Connor (Author)

Terrence M. O'Connor, LLM, has practiced government contract law for over 35 years. After 15 years as an attorney for the federal government, he entered private practice, focusing on litigation and teaching. He has tried more than 70 criminal jury cases and more than 30 civil/non-jury administrative hearings, including government contract claims before the U.S. Court of Federal Claims and various Boards of Contract Appeals. He is the co-author of the Federal Contracting Answer Book and the author of Understanding Government Contract Law. He also writes monthly columns on recent court, GAO, and BCA decisions in the Management Concepts monthly newsletter, Federal Acquisition Report.

In determining whether a decision is arbitrary and capricious, the government manager must consider relevant data and provide a coherent and reasonable explanation of the decision he or she makes.

So when the courts say a government manager must make a decision that is “reasonable,” it’s the same as saying that the decision cannot be arbitrary and capricious.

When you think about it, making a government manager act reasonably can be both a blessing and a curse. It’s a blessing because it acknowledges that there is not only one decision that is the right decision. Courts use the phrase “zone of reasonableness” to express this.

Making a government manager act reasonably can be both a blessing and a curse.

In a sense, the reasonableness test makes judges leave their personal preferences at home. That’s the way the founding fathers wanted it. Under the theory of separation of government power, Congress (the legislative branch of government) has told judges (the judicial branch) to let the agency people (the executive branch) do their jobs. Courts generally defer to an executive branch decision—even if the particular judge might not agree with it and might prefer a different decision—as long as the government manager’s decision is “reasonable”:

If the court finds a reasonable basis for the agency’s action, the court should stay its hand even though it might, as an original proposition, have reached a different conclusion as to the proper administration and application of the procurement regulations. 1

So it’s a blessing that a court won’t force a government manager to follow a judge’s personal belief.

But “reasonable” is also a curse. First, it seems too vague to work with as a practical matter. Aren’t we all reasonable? Or at least, aren’t we reasonable? (It’s the other person who isn’t reasonable.) Isn’t it hard for everyone to agree on what is reasonable and what is not? People always have a reason for doing something, so isn’t everything, therefore, automatically reasonable? It’s at this point that the apparently redundant word “good” has to be added to “reason.”

Although there may be gray areas allowing reasonable people to disagree, some decisions are clearly unreasonable. Let’s look at types of decisions made during the government contract process.

Rule 1: To be reasonable, the government manager’s decision must be in writing.

One of the surest ways for a government manager to be found “unreasonable” is to make an important decision and have nothing in writing to explain it.

[The Government Accountability Office] is able to assess the reasonableness of an agency’s source selection process only where adequate documentation of that process exists. Without such documentation, we cannot be certain that the agency action was not arbitrary. 2

Without documentation, a government manager’s decision is deemed unreasonable.

One judge made this point nicely when he said, “Procurement officials must use judgment … they cannot act as ‘automatons.’” 3

Rule 3: To be reasonable, the government manager’s written, thoughtful decision must follow the rules for making a decision.

Agency regulations like the Federal Acquisition Regulation (FAR) often give good advice here. For example, a decision on who won a contract should follow the rules in FAR 15.308:

The source selection decision shall be documented, and the documentation shall include the rationale for any business judgments and tradeoffs made or relied on by the SSA [Source Selection Authority], including benefits associated with additional costs.

Documentation of a contract award has to compare the pros and cons of the offers.

BEING FAIR AND REASONABLE IN ADMINISTERING A CONTRACT

Where does it say that a government manager has to be fair and reasonable in administering a contract? Nowhere. Instead, it’s implied by the common law; it’s called “the implied duty of good faith and fair dealing.”

Do contracting parties need a contract provision promising each other to carry out the contract fairly? Not really, although that answer may seem naive in our litigious society. For years, judges have built into contracts an implied duty of good faith and fair dealing.

But being implied, this duty presents problems. Implied duties under a contract are hard to identify and pin down because they are not written, so any implied duty raises hard questions. Is it fair to make people follow unwritten rules? If someone breaches an unwritten rule, does he have to pay damages? Can unwritten rules even be breached? The answer to all three questions is “yes.”

Written contracts have one unwritten rule you must know: A government manager must be fair and reasonable.

Although difficult to identify, some violations of this implied duty are obvious. One example, a rare one, shows bad faith on the part of the government.

The Libertatia Associates (TLA) had a grounds maintenance contract at Fort Rucker, Alabama. The contracting officer’s representative (COR) on the contract told TLA employees that, in the words of the COR, they should think of him as Jesus Christ and the government manager as God. Some people heard the COR say that he would run TLA off the contract. Others heard him say to the president of TLA that he would break TLA. The court found that the COR had a “specific intent to injure” the contractor. The COR’s “Jesus Christ” comparison “showed the COR to be a contracting official without a proper understanding of his role.” His personal animosity was clear from his “break them” statements. 4

Although it might not seem logical to non-lawyers, bad faith and good faith are not flip sides of the same coin. Proving bad faith was not part of proving that the government didn’t act in good faith. They are two different concepts. Bad faith is driven by malice. Good faith is violated by self-interest; people who are selfish are not necessarily out to hurt other people—they just want to help themselves.

This implied duty typically can be violated in many ways, such as by failing to cooperate in contract performance or interfering with contract performance. One respected government contract authority believes that “By far, the most important implied duty in government contracting is the duty to cooperate.” 5 One of the problems with defining the duty to cooperate is that what one party thinks is “cooperation,” the other party often thinks is work well beyond what the contract calls for. Closely related is the duty not to hinder.

Here’s the distinction between the two, but notice that the test is the same—reasonableness.

The implied duty to cooperate imposes an affirmative obligation to do what is reasonably necessary to enable the contractor to perform. Determination of a breach of the duty requires a reasonableness inquiry. The nature and scope of that responsibility is to be gathered from the particular contract, its context, and its surrounding circumstances. In contrast, the implied duty of noninterference is a negative obligation that neither party to the contract will do anything to prevent performance thereof by the other party or that will hinder or delay him in its performance. The Government’s actions or inaction must be shown to be unreasonable….” 6

Explore how to assess a wide range of factors to determine which contract type will provide the government the best value...

Transform your workplace into a well of learning and employee potential fulfilled with the help of this book!

Winning with Past Performance

Learn project management processes, tools, and techniques that are scalable and adaptable to small projects.