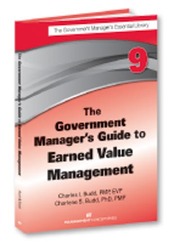 This volume presents practical guidance for the government manager on earned value management (EVM), from basic calculations to how to find the most useful information online. Emphasis is on the relevant reports that contractors are required to submit to the federal government as part of their compliance with mandated EVM on projects. Because the data submitted on reports do not translate automatically into recommendations for actions to be taken, information is included on how to analyze and evaluate contractor reports. This book is a must-read for understanding EVM on government projects.

Book Details
Overview
This volume presents practical guidance for the government manager on earned value management (EVM), from basic calculations to how to find the most useful information online. Emphasis is on the relevant reports that contractors are required to submit to the federal government as part of their compliance with mandated EVM on projects. Because the data submitted on reports do not translate automatically into recommendations for actions to be taken, information is included on how to analyze and evaluate contractor reports. This book is a must-read for understanding EVM on government projects.
About the Authors
Charles I. Budd (Author)

Charles I. Budd, PMP, is a principal of Budd Management Systems in Atlanta, Georgia. He is certified as a system analyst by the Foundation for Administration Research.

Charlene S. Budd, PhD, CPA, CMA, CFM, PMP, is Professor Emeritus of Accounting at Baylor University, where she has taught graduate accounting and project management courses. She is active in the American Institute of CPAs, the American Accounting Association, the Financial Executives Institute, and the Project Management Institute.

THE FUNDAMENTALS OF EVM

Earned value management (EVM) as we know it today might not exist without the federal government’s instigation and support. In the 1960s, the U.S. government commissioned a project reporting system composed of 35 requirements called the cost/schedule control systems criteria (C/SCSC). The objective of that system was to provide a common basis for reporting and decision-making by both the project initiator and the project contractor. That is, the project owner (the federal government) needed information that established a valid relationship among cost, schedule, and technical requirements in a summarized and meaningful format from the people actually performing project work so timely decisions could be made.

After the U.S. government spearheaded the development of objective project reporting, industry groups joined the effort and C/SCSC was modified into today’s 32 EVM criteria. The first industry-approved EVM standard, ANSI/EIA 748-A, was published by the Government Electronics and Information Technology Association (GEIA) in 1998 and adopted by the federal government in 1999. In 2007, ANSI/EIA-748-B (the EVM standard) was approved. Through association mergers, GEIA later became a part of TechAmerica. An ANSI-accredited national standards developer, TechAmerica released ANSI/EIA-748-C in March 2013. The ANSI/EIA-748 version in force at the time contracts are signed, as elaborated and interpreted by various government documents, is the version that governs contractor EVM systems.

ANSI/EIA-748 has been through several revisions; the version in force when a contract is signed is the governing version for that contract.

An earned value management system (EVMS) is universally defined as a project management system that, at a minimum, complies with the 32 criteria set forth in ANSI/EIA-748. “Earned value” is the primary metric for reporting progress on a project or program. Work “earned” is the amount of budgeted work scheduled that has been completed.

EVMS is an integrated project management system that includes the planning and execution of a project or program. From a high-level view, as shown in Table 1-1, it seems quite simple.

TABLE 1-1
Basic Elements of an EVMS

“Earned value” is the metric that represents the amount of scheduled project work that actually has been completed.

The Department of Defense (DoD) presents a complete description of EVMS in Part 1, Section 1, of its 2006 Earned Value Management Implementation Guide:

Earned Value Management (EVM) is a program management tool that integrates the technical, cost, and schedule parameters of a contract. During the planning phase, an integrated baseline is developed by time phasing budget resources for defined work. As work is performed and measured against the baseline, the corresponding budget value is “earned.” From this earned value metric, cost and schedule variances can be determined and analyzed. From these basic variance measurements, the program manager (PM) can identify significant drivers, forecast future cost and schedule performance, and construct corrective action plans to get the program back on track. EVM therefore encompasses both performance measurement (i.e., what is the program status) and performance management (i.e., what we can do about it). EVM is program management that provides significant benefits to both the Government and the contractor. 1

U.S. government entities, such as DoD, the National Aeronautics and Space Administration (NASA), the Department of Energy, and the Office of Management and Budget (OMB), as well as international government entities, have set the basic definitions, concepts, and requirements for EVMS through their contract management agencies. Many implementation and intent guides have been published and revised, but the basic EVM requirements (with the exception of some rewording to clarify meaning) have remained unchanged.

Although DoD will continue to review contractors’ EVM systems, it encourages contractors and the entire industrial sector to assume growing responsibility for EVM processes. Numerous EVM consulting and training assistance groups stand ready to assist in EVM implementation, execution, reporting, or any other facet.

In April 2013, DoD issued a supplement to the Defense Federal Acquisition Regulation (DFARS) in which Subpart 234.2 further confirmed the system requirements for use of an EVMS. Those requirements include the following:

Other sections of Subpart 234.2 cover the details of exactly how the contractor’s EVMS will be evaluated, how deficiencies are noted for correction, and how a final “accept” or “reject” decision is made. Subpart 234.2 also describes how inspection results at various stages of the investigation must be reported.

Government requirements for a contractor’s use of EVM vary depending on the size and type of contract.

The EVMS criteria are usually divided into five sections:

The 2006 revision of the ANSI/EIA criteria added “scheduling” to the second section; the sections of the 2013 revision remain essentially unchanged.

This five-step division is intended to address basic management concepts, but many of the concepts overlap. The criteria are presented fully in Appendix I with the latest version notations. The following are the key aspects of each criterion.

1.   Define the work with a work breakdown structure (WBS).

2.   Identify organizational breakdown structures (OBSs) that will do the work specified by the WBS.

3.   Provide for integration of company processes and the program structure.

4.   Identify the function for controlling overhead.

5.   Provide integration that permits performance measurement from the WBS.

6.   Schedule the work with task sequence and appropriate logic linkages between all tasks.

8.   Establish and maintain a time-phased budget baseline at the control account level.

12. Identify and control any work defined as level of effort.

15. Ensure that the project’s target cost equals the sum of all budgets and reserves.

16. Record direct costs (those costs traceable only to the project/program) in a formal system.

17. Summarize direct costs from control accounts to the WBS elements.

23. Identify and explain differences between actual and planned schedule and cost performance.

27. Revise estimates of cost at completion based on performance to date.

29. Reconcile current budgets to prior budgets.

Explore how to assess a wide range of factors to determine which contract type will provide the government the best value...

Transform your workplace into a well of learning and employee potential fulfilled with the help of this book!

Winning with Past Performance

Learn project management processes, tools, and techniques that are scalable and adaptable to small projects.