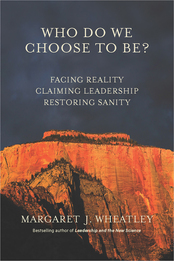 Who Do We Choose To Be?

This book is born of my desire to summon us to be leaders for this time as things fall apart, to reclaim leadership as a noble profession that creates possibility and humaneness in the midst of increasing fear and turmoil.

$24.95
(member price: $22.46)
Free shipping on all orders from the BK Publishers store.
Or find a local bookseller with Indiebound.

This book is born of my desire to summon us to be leaders for this time as things fall apart, to reclaim leadership as a noble profession that creates possibility and humaneness in the midst of increasing fear and turmoil.

Now in my 70s, I can look back and appreciate what a rich and blessed life I’ve lived. I’ve been able to give my curiosity free rein and to be with extraordinary teachers. I’ve been able to explore a wide range of disciplines and lived in several different cultures. I’ve learned from an incredible diversity of people, from indigenous peoples to the Dalai Lama, from small town ministers to senior government ministers, from leading scientists to National Park rangers, from engaged activists to solitary monastics. This access to so many sources of experience and wisdom, held in the container of friendship, continues to deepen my resolve to bring whatever I’m learning into my books and teachings. For me, privilege is a responsibility, rather than a source of guilt.

Having experienced so much, I want to find the best means to communicate with all of you as we aspire to do meaningful work and be of service to others in this ever-darkening world.

I have been a consultant and speaker since 1973, and have worked, I believe, with almost all types of organizations and people. They range from the head of the U.S. Army to twelve year old Girl Scouts, and include Fortune 50 corporations, government agencies, healthcare institutions, foundations, public schools, colleges, major church denominations, professional associations, and monasteries. I have also worked on all continents (except Antarctica). Invitations to work in so many different places, with all types of people, fed both my curiosity and ability to recognize patterns of behavior common across cultural and institutional differences. And it kept me alert to changing trends in leadership. I am fond of making generalizations, sometimes to the annoyance of others, but they feel genuine and accurate to me because of the scope and depth of my work.

I have served as full-time graduate management faculty at two institutions, Cambridge College in Cambridge, Massachusetts, and The Marriott School of Management, Brigham Young University, Provo, Utah. I’ve been a formal advisor for leadership programs in England, Croatia, Denmark, Australia and the United States and, in Berkana, with leadership initiatives in India, Senegal, Zimbabwe, South Africa, Mexico, Brazil, Greece, Canada and Europe. For the past nine years, I have had a formal appointment (President approved) to serve the National Parks as one of twelve citizen advisors on their National Advisory Board. My portfolio has been leadership and culture change within the system of 400+ national parks. This work has been among the most rewarding of my career, both because of the mission of National Parks and the dedicated and smart people who work to fulfill this mission under increasingly difficult circumstances.

I am co-founder and President of The Berkana Institute, a global non-profit founded in 1991. Berkana has been a leader in experimenting with new organizational forms based on a coherent theory of how living systems adapt and change. Berkana has worked in partnership with a rich diversity of people around the world who strengthen their communities by working with the wisdom and wealth already present in their people, traditions and environment. These pioneers do not deny or flee from our global crisis; they respond by moving courageously into the future now, experimenting with many different solutions. Berkana’s newest work is to train Warriors for the Human Spirit, leaders from around the world who engage together, learning-in-community, training with discipline and dedication to develop a stable mind and skillful means. These spiritual warriors do their work with compassion and insight, vowing to refrain from using aggression and fear to accomplish their ends. www.berkana.org.

My newest book is: Who Do We Choose To Be? Facing Reality, Claiming Leadership, Restoring Sanity

(June 2017, Berrett-Koehler). This book is born of my desire to summon us to be leaders for this time as things fall apart, to reclaim leadership as a noble profession that creates possibility and humaneness in the midst of increasing fear and turmoil by creating Islands of Sanity.

Each of my books has been an invitation to explore new ways of being and thinking based on wisdom drawn from new science, history, and spiritual traditions. Leadership and the New Science (1992, 1999, 2006, in 18 languages), is a voyage of discovery into an orderly universe where relationships are the basis of everything, a world that organizes itself according to unchanging laws that modern humans ignore. A Simpler Way (1996) continued that journey, asking whether we could organize following life’s example so that our lives and work would be less difficult, more delightful.

In Turning to One Another (2002, 2009), I invited readers to explore the power of conversations to create strong relationships and meaningful change. Finding Our Way (2005) offered a variety of roadmaps for how to navigate the different aspects of our lives, from nations to organizations to family, as the world grows more uncertain. When I observed how difficult it was for good leaders to not lose their way, I wrote Perseverance (2010) as a daily guide for maintaining our commitment, presence and energy no matter how hard the work is. Walk Out Walk On (2011), co-authored with Deborah Frieze, described the work of communities daring to live the future now, in conditions much harsher than ours, bright beacons illuminating what’s possible when we humans commit to working together. In 2012, I offered So Far From Home where I detailed the dynamics of global society that have emerged to create a world far distant from the one we were working so hard to create. I strongly encouraged us to notice what’s going on, and to counter this downward spiral by standing up as Warriors for the Human Spirit.

In 2014, I wrote How Does Raven Know? Entering Sacred World, A Meditative Memoir. Unlike my previous seven books, How Does Raven Know? invites you to see the world anew informed not by science but by sacred wisdom–a world we modern ones have dismissed or ignored, but still held for us in the ancient wisdom traditions of most cultures. It is not a call to action, but to relationship with forgotten companions and animate Earth which, in my own experience, willingly offer us support, encouragement, and consolation.

My articles appear in a wide range of professional publications and magazines, and can be downloaded free from my website, www.margaretwheatley.com. On the website, you can order DVDs and CDs that I’ve produced on topics ranging from personal to organizational.

I was raised on the East Coast of the U.S., first in the New York City area, and then lived in Boston for 15 years. In 1989, my family and I moved west to the mountains and red rock canyons of Utah. I have two adult sons and have raised five stepchildren, all seven from the same father. There are now 21 grandchildren (and counting) and three great-grandchildren. My family, friends and work bring me joy, and so does the time I spend in the true quiet of wilderness or wandering deep into the red rock canyons of Utah.

Who Do We Choose to Be?

An Invitation to the Nobility of Leadership

It is possible, in this time of profound disruption, for leadership to be a noble profession that contributes to the common good. It is possible, as we face the fearful complexity of life-destroying problems, to experience recurring moments of grace and joy. It is possible, as leaders of organizations, communities, and families, to discover deep and abiding satisfaction in our work if we choose not to flee or withdraw from reality.

It is possible to find a path of contribution and meaning if we turn our attention away from issues beyond our control and focus on the people around us who are yearning for good leadership and engage them in work that is within reach. It is possible to use our influence and power to create islands of sanity in the midst of a raging destructive sea.

So much is possible if we consciously and wisely choose how best to step forward as leaders for this time.

This is a book that offers a path for leaders to engage well and sanely with the destructive dynamics of this time that now manifest at every level, from individual to organizational to global. We enter the path by bravely facing reality, willing to see with clarity and discernment where we are and how we got here. We seek to understand the forces at work that created this present world, not the one we have spent long years laboring to create, but a world that increasingly harms most and benefits scant few, a world stubbornly spiraling toward self-destruction.

Many of us feel that we have no choice but to protect ourselves from the increasing harshness and horrors of this world by withdrawing, staying busy with minor tasks, suppressing emotions of despair, grief, powerlessness. Some seek comfort by denial, creating personal bubbles to shut the world out. But the desperate effort that goes into withdrawal, suppression, and denial robs us of the very energy we need to be good leaders. The energy now spent on self-protection can be converted into positive energy if we’re willing to encounter reality and see it clearly. Facing reality is an empowering act—it can liberate our mind and heart to discern how best to use our power and influence in service for this time.

We cannot change the way the world is, but by opening to the world as it is we may discover that gentleness, decency and bravery are available, not only to us, but to all human beings.