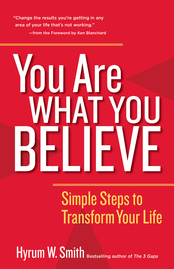 You Are What You Believe

Simple Steps to Transform Your Life

We all have times in our lives when the results of our behavior don't seem to be meeting our needs. In this new book, Hyrum Smith does two things that are invaluable to people who wish to make their lives less painful. First, he reveals, through a clear and simple model, how we get to the point where our behaviors cause these kinds of problems. Then, with a simplicity that is impressive in itself, he describes the steps we must take to identify and rectify the beliefs leading to our painful behavior. The result is a powerful process for transforming your habits and relationships and achieving lasting personal and career success.

$14.95
(member price: $13.46)
Free shipping on all orders from the BK Publishers store.
Or find a local bookseller with Indiebound.

This third edition of an international bestseller—over 2 million copies sold worldwide and translated into 33 languages—details how its powerful insights...

We all have times in our lives when the results of our behavior don't seem to be meeting our needs. In this new book, Hyrum Smith does two things that are invaluable to people who wish to make their lives less painful. First, he reveals, through a clear and simple model, how we get to the point where our behaviors cause these kinds of problems. Then, with a simplicity that is impressive in itself, he describes the steps we must take to identify and rectify the beliefs leading to our painful behavior. The result is a powerful process for transforming your habits and relationships and achieving lasting personal and career success.

Meet the Author & Other Product Contributors

Hyrum W. Smith is a distinguished author, speaker, and businessman. Hyrum stepped down as Chairman & CEO of the Franklin Covey Company, Franklin Quest’s successor, in 1999. He continued as Vice-Chairman of the Board until 2004. For four decades, he has been empowering people to effectively govern their personal and professional lives. Hyrum’s books and presentations have been acclaimed by American and international audiences. He combines wit and enthusiasm with a gift for communicating compelling principles that incite lasting personal change.

Hyrum is the author of several nationally-acclaimed books, including The 10 Natural Laws of Successful Time and Life Management, What Matters Most, The Modern Gladiator, You Are What You Believe and he co-authored Excellence Through Time Management.

Hyrum grew up in Honolulu, Hawaii, and then spent two years in London, England. He returned from London and was drafted into the army.

He was married in 1966 to Gail Cooper while on leave. They have six children (five living) and 24 grandchildren (22 living).

After graduating Honor Graduate from Officers Candidate School, he commanded a Pershing Missile unit in Germany. Hyrum graduated from Brigham Young University in 1971 in Business Management.

In 1984, he became one of the original creators of the popular Franklin Day Planner. He also co
-founded the Franklin Quest Company to produce the planner and train individuals and organizations in the time management principles on which the planner was based.

Hyrum has received numerous honors and community service awards, including the following:

Hyrum enjoys golfing, shooting pistols and rifles, listening to classical music, horse riding and spending time with his family at his ranch in southern Utah.

Foreword by Ken BlanchardKen Blanchard is the founder and chief spiritual officer of The Ken Blanchard Companies. He is the coauthor of several best-selling books, including The One Minute Manager®_and The New One Minute Manager®, Raving Fans and Gung Ho! His books have combined sales of more than twenty million copies in forty-two languages. Ken is also cofounder of Lead Like Jesus, a nonprofit organization dedicated to inspiring and equipping people to be servant leaders.
Back to Top ↑

You Are What You Believe

There are three constants in life: change, choice, and principles.

Think about the following statement:

The basic principles that help a human being become more productive and effective have not changed for six thousand years.

Thirty-three years ago I started the Franklin Planner business with my partners. Since then I have had the opportunity to teach a great number of time management seminars all over the world. Through the years it has become common for people to approach me before or after a presentation. They come up to me, lower their voices, look around to make sure nobody’s listening, and then say, “You know, Hyrum, I wish I lived a hundred years ago, when they had more time.”

“Really?” I’d respond. “How much more time did they have a hundred years ago?”

That is a common misperception. Do you know what the only difference is between today and a hundred years ago? It is that today we have more options. Why do we have more options? Because we do things faster. As a technologically advanced culture, we are into speed.

If my grandfather missed a train, it was no big deal. He’d wait twenty-four hours and catch another train. If my father missed an airplane, it was no big deal. He’d wait five hours and catch another airplane. If I miss one section of a revolving door, I go nuts. And so do you. Why do we do that? Because we want speed, that’s why. Would you tolerate today the speed of a computer from fifteen years ago?

The basic principles that help a human being become more productive and effective have not changed for six thousand years.

Say it out loud. Write it down.

Every generation has to rediscover these principles. We give new names to them; we write books about them. A good friend of mine, Stephen Covey, wrote a book, The 7 Habits of Highly Effective People. I wrote a book, What Matters Most. Read either book. There’s not a new idea in either book. Why do I tell you this? Because what I’m going to be sharing with you in this book is really old stuff; it just happens to be very relevant for today. The magic of the 7 Habits is the fact that Stephen put seven of them together. The magic is how they are taught for the twenty-first century. The basic principles go back a long way.

Why do I make an issue of this? What hasn’t changed in the last hundred or a thousand years? You and I. As human beings, we haven’t changed. We still have to go to the bathroom several times a day. We put our pants on one leg at a time. The human being is the same. What has changed? Our environment has changed. And it continues to change at warp speed. The tools with which we implement these principles are changing fast. But the basic principles that help you and me become better, greater people haven’t changed for a long time.

The process of learning these principles must be rediscovered in every generation by individuals and organizations. We explored this at Franklin Quest, the time management company I founded back in the 1980s.

As mentioned earlier, at Franklin Quest we became obsessed with this question: What causes permanent behavioral change? Carrying a planner around was a behavioral change. Why did six million people in 170 countries do that?

As we asked ourselves this question, a model surfaced that we all could agree upon. We decided to call it the Reality Model.

In this book I’m going to introduce you to the Reality Model, and make you dangerous with it. This model can, if you allow it to, change your life and the lives of all those with whom you share it. The foundation of the model is understanding the definitions of the “real world,” principles, natural laws, and addiction.

The real world is the world as it really is, not as we believe it is or think it should be. This is an important definition to keep in mind. We will come back to it later.

After I left Franklin Covey, some friends and I started a new venture called the Galileo Initiative. Why did we call our new little venture Galileo? As I’m sure you know, Galileo was an Italian physicist, mathematician, astronomer, and philosopher who played a major role in the Scientific Revolution. His achievements include improvements to the telescope and the consequent astronomical observations, and he has been called the “father of science.”

Until the time of Galileo, most people in the Western world believed that the earth was the center of the universe and the sun went around the earth. Actually, in the early sixteenth century, it was Copernicus who first stated that the earth revolved around the sun. He died in 1543, just twenty years before Galileo was born. With the exception of a few, no one took his theory seriously. Then Galileo came along and said, “Hey, I’ve improved the telescope! I’ve done the math! I can prove that the earth is going around the sun!”

How did the world react to this new concept? Galileo was ridiculed, put on trial, convicted of heresy, and excommunicated from the church. He spent the last fifteen years of his life under house arrest, as a condemned heretic. But . . . he was right. He had the correct perception of the real world. That’s what the Reality Model helps us do: it helps us to see the world as it really is.

Before we get into the nuts and bolts of the Reality Model, I would like to define three more words that will be used in our discussion.

Once we see how things really are, we begin to perceive the principles our beliefs are based upon. Principles are what we believe to be true about ourselves, and what we believe about the world and our place in it. The principles we follow don’t change based on how our outside circumstances influence us. Correct principles can give us direction as we make life decisions. They are guideposts that help us successfully navigate the bombardment of change we are experiencing every day.

Natural laws are fundamental patterns of nature and life that human experience has shown to be valid. Natural laws are rarely if ever changed or influenced to move in a different direction. We cannot change these laws to be what we want because they are universal and affect everyone. Choosing to accept or reject these laws will have an impact on the choices we make and the consequences of those choices.

Now that we have defined the real world, principles, natural laws, and addictions, you are ready to be introduced to the Reality Model. As you read, remember these definitions. They will be instrumental in understanding and applying the model effectively.

“Hyrum Smith takes you clearly, cogently, and compassionately through the steps necessary to create lasting, positive change. He becomes your wise and caring friend, who will assist you in breaking through to extraordinary results.”
—Richard H. Brown, international business executive and former CEO, Electronic Data Systems Inc., Cable and Wireless PLC, and H&R Block Inc.

“Hyrum Smith has done it again! If you are new to Hyrum's work, prepare to be challenged, impressed, and, above all, improved by reading You Are What You Believe.”
—Linda Eaton, Executive Vice President, Director of Instruction, Cannon Financial Institute